Synthesis of Dr. Bernardo Udaquiola´s opinion (Oncologist, chief of the Semiology Policlinics and Autovalid´s Room from the Oncology National Institute of Uruguay)

Clinical studies were presented to the Technology Assessment Unit of the Ministry of Health Public Health. Responsible Delia Sanchez. 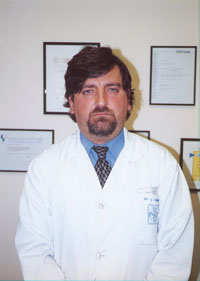 Neoplasies are traditionally treated with three therapeutic weapons (chirurgy, radiotherapy and chemotherapy).They are very important, but do not oppose to one each other but complement each other. In spite of all the advances during the last past years, cancer still has not been defeated, as other illnesses have indeed. This fact creates in the patients a terrible fear towards the word cancer that many times avoids the correct treatment and therefore a better quantity and quality of life.

NCP: 55497
· Medicine doctor withdrawn from the University of the Republic of Uruguay on April 28th., 1992.
· Oncology postgraduate from Medicine University, December 22nd., 1999.
· Oncologist doctor from the Oncology National Institute from January, 1994 until present.
· Doctor of Preventive Policlinics of the Oncology National Institute from 1994 until present.
· Collaborator doctor of the Breast Cancer National Program from 1992 until present.
· Retainer doctor (hospitalization floor, radio, policlinics, emergency and Special Care Unit) in Uruguay-Spain Hospital from March 23rd., 1993 to May 17th., 1995.
· Substitute doctor in Uruguayan Medical Hospital from 1995 to 2000.
· Oncologist doctor in National Civil Employees Association, afterwards COMAEC, from 1994 to 2001.
· Interviewer doctor in the World Health Organization (1992)
· Doctor with largest casuistic in the last 5 years in the PRONACAM (National Program against Breast Cancer)
· Scientific search on GREEN SAP drops action in the treatment of malignant neoplasies, from April, 2000.

Improve and increase your quality of life! Excellent antioxidant that has been used successfully by oncologists to treat cancer patients!